My life as Ring Master of a traveling circus 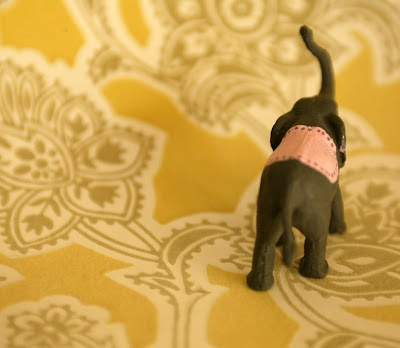 Ran Away from the Circus by whiteowlpictures
I would like to take this opportunity to tell a few tales of adventure that have occurred over the last few weeks. Not "Raiders of the Lost Ark" type adventure, more "Adventures in Babysitting" adventure.
The first involves our new dog, Coco, who came dangerously close to being our "old dog" Coco. We had had her for one week when I took her for a walk around our neighbourhood. I had planned on getting her a dog license that very day, but thought that surely there was no real rush. Mistake number one.
I turned on to a side street (Sadie was in the Ergo baby carrier on my front), and what pulls over on the street but the big white van marked ANIMAL CONTROL. I'd seen this officer in action before - he's a burly French Canadian with a penchant for buggery (always wanted to use that Dr. Evil line). Well, not really - he's tough but fair, and once I explained to him that we'd only just got her and yes, I was on my way to get a license, he let me off with a warning, but wrote me up just the same.
So on we went, next to the pet store where I ordered Coco a name tag with our phone number on it and also fitted her for a harness, thinking this might be a little more secure then just a collar. Mistake number two.
We began to head home, but I started to think I might like a coffee. Do I or don't I? I thought. Mmmm, nah. Wait, maybe. Okay, yes. Mistake number three.
I turned in the direction of Starbucks.
For the first time I found myself in a situation where I needed to tie Coco up somewhere and leave her out of sight briefly. Which I did. And uh, yeah, that'll be big MISTAKE NUMBER FOUR.
As I was ordering my coffee, someone pounced on me from behind. It turned out to be one of my oldest friends, Nicole, whom I had just been with earlier that day. We laughed at the coincidence and planned to sit down together. "I'm just going to go check on Coco" I said.
Next thing I know, a frantic girl is bursting through the doors of Starbucks going WHO OWNS A WHITE DOG?! IT JUST BOLTED DOWN FORT STREET!
People. Fort Street in Victoria is the Toronto equivalent of, oh, say Queen. The Vancouver equivalent of West Fourth, the San Francisco equivalent of Powell (minus the cable cars). Point being, it's busy. And it is one thing if a Golden Retriever gets loose and heads up the street. It is another thing entirely if a young, terrified Whippet gets loose and takes off like a bat out of hell.
My heart sank instantly. I was sure she was a goner, she had no identification on her. Goose: cooked.
The following 10 minutes or so is pretty blurry. By some grace of God Nicole was with me, delegating search parties and declaring an ALL POINTS BULLETIN. Witnesses said Coco scrambled out of her harness and was acting erratically. There were reports of a shady character possibly letting her loose (this of course was a rumor - the fact of the matter is that she was one crazed Whippet.)
My husband left work and joined the search. Two other friends jumped in their cars and began searching for a needle in a haystack. At one point the three vehicles all converged at one intersection.
I was devastated. I couldn't believe I'd just lost my dog after one week. I'll never get another pet again, I vowed. I imagined her getting hit by a car or worse, going into hiding and spending the next few nights cold and shivering, eventually starving to death or being eaten by some animal braver than she, like a German Shepard or a cat.
As fate would have it, I found myself dialing the number of the burly French Canadian Animal Control Officer who had stopped my not 40 minutes earlier. I also called the SPCA in the event that someone picked her up and recognized she was someone's pet and turned her in. Then I walked home retracing my steps, hoping for an Incredible Journey miracle. I ran into my dad along the way who was also driving the streets, searching.
As I approached a park near our house, I saw a man with a spindly white dog in the distance. Gasp! Coco? COCO!!!! I began running toward them, a sleeping Sadie bouncing up and down in her carrier. COCO??!!? No. A white greyhound. Defeat. And then "WHAT ARE YOU LOOKING FOR?" two little girls on their bikes witnessing a crazy person.
FYI, thank goodness Sadie was a little angel through all of this and remained asleep. In all the chaos, if she had woken up and started crying in the carrier, I think I would have laid down on the sidewalk and asked Nicole to please ADMIT ME.
So anyway, I turned on to our street and in the distance saw Nicole, who had since gone home to change out of her heels and into some athletic gear appropriate for lost-dog searching. God love her. She began running toward me. THEY'VE GOT HER, THEY'VE GOT HER.
"ALIVE???" I asked.
That very same Animal Control Officer had picked her up and taken her to the pound. The rest of the story needs no telling, she is now safe and sound back home with us, no worse the wear. Coco, we're so glad you're still with us.
The second adventure story will have to wait, as this entry has proven long. But reserve your seats, ladies and gentlemen, the Circus is coming to town.....
Posted by Koo and Poppet at 8:36 PM

Oh my goodness, gracious..I'm so very relieved that your dear Coco is safe at home...wow, what a story!!! Take good care - and hope you get some rest. Can't wait to hear about the Circus! Wow!!