Guilt: I has it 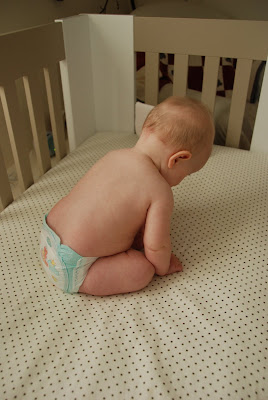 I feel like a horrible mother.
This evening, Scott and I did not earn top marks as parents. We were careless and unreceptive to Sadie's cry for help (literally). It's the only way she knows how to communicate her needs to us at eight months old, and we shrugged it off as a tantrum brought on by tiredness. Oy.
As we undressed her for her bath, I saw the injury. The metal spring-loaded clip with the velcro strap that clips her soother to her clothes/car seat/ blankie had actually been clipped to her SKIN, as well as her shirt, just on the outside of her armpit. The skin wasn't broken, thank God, but it was one hell of a pinch - two dark purple parallel lines and an extremely raised bit of skin in between. She had endured this for a good twenty minutes; all the way home from our friends' house, being passed around and twisted and turned and tugged by her parents as we got her in and out of her stroller, all the while trying to calm her with "don't worry, we'll be home soon" and other such useless lines. And all the while she was uncharacteristically shrieking, probably cursing her incompetent parents and her own inability to verbalize COULD YOU PLEASE GET THIS CLAMP OFF MY SKIN, ALREADY?!?!
Needless to say, Scott and I felt so bad that both of us have since endured a fitting punishment and wore the same metal clamp on our own skin long enough to know that no baby should have to feel that pain for even a second. It bloody hurts! Basically a form of torture. I would have almost rather kicked Sadie in the head. At least then I would have known right that second what had happened to her and been able to immediately console her. Instead, she was trying to tell us something and we did nothing. The guilt had literally drained all of my energy, and after the commotion had subsided all I could do for a period of about ten minutes was to stare vacantly at the kitchen cupboards and robotically insert tortilla chips into my mouth, one after the other, wondering how I could have done this to my baby girl and how I would explain this senseless act of parenting when my day of reckoning comes.
Oy, again. 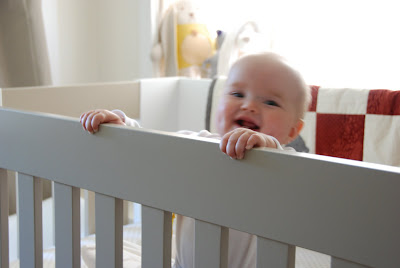 Well, in the end, she made it of course, and she's really no worse for wear - I'm pretty sure it was harder on us. As I put her to bed tonight I told her she could wake up as much as she wanted through the night, and I promised to not get frustrated or complain that I was tired.
I think what gets me the most is the knowledge that although she'll likely never have her skin pinched in her soother clip again (it has since been destroyed), these types of little accidents will continue to happen throughout her childhood and will often be preventable. As I sat there with her sleeping in my arms, just thinking about those future incidents, which will no doubt have me feeling this guilty again, had me completely overwhelmed.
I guess the more our hearts fill up with love for this wee little person, the harder they break right along with her when we've unintentionally let her down.
Scott stayed in her room with her tonight, just sitting there in the dark, long after she'd fallen asleep.
Posted by Koo and Poppet at 8:26 PM

Oh sad! Don't feel too bad, though...it could happen to anyone ;)

I feel your pain Sarah! We had an incident here the other night too...Pilar was with sergio at his computer standing on his lap, and her foot slipped and he didn't catch her in time, and her chin hit the table...OUCH!!! I nearly threw up on my way to scoop her up, and cuddled her for hours. It could have been really bad, I shudder to think of her teeth cutting her tongue, but that didn't happen. She didn't even get a bruise. THANK GOD! They are too precious, and yes we can be careless, but it doesn't mean we don't love them. How are you otherwise?

Oh poor little sausage! I've done things like that before... I growled my little girl (really bad growling) after ignoring me in the library and not coming when I called and called... only to find she was half deaf from an ear infection!

Love your blog by the way.

oh, i feel your heart so closely here. i am so sorry this happened and even though you know full well, it wasn't your intention, it is still so hard.

the other day i was driving and Cedar was of course in his carseat in the back and he was crying (a bit harder than usual but at times, he just loathes being alone back there). i didn't look back at him but rather just kept trying to sooth by talking to him. after one minute, when i finally looked back, i saw that the carseat had tipped over on its side! i immediately pulled over on the freeway. it was so frightening. i have no idea how the carseat loosened but just like you threw out the soother holder, we tightened that seat like none other...and are now going to get a large mirror so i can see him through my rear view mirror (the teeny one we have now doesn't work).

i cried so much and if i had chips in front of me, i would have eaten those too.

sending you understanding and comfort.