Last weekend we left our little island home and set out on a road trip through the Rocky Mountains. Our destination was a wedding in Canmore, Alberta, and after an eventful night in Vancouver with a couple of our favourite people, we drove for 11 hours on a beautifully bright first day of October.

Sadie was amazingly well-behaved, although we did stop in Kamloops to buy a portable DVD player. We made the mistake of allowing her to pick the DVD she wanted though, and now the shrill, inane voices of Strawberry Shortcake and her sugary friends are forever burned into our consciousness. On the way home, we picked up Toy Story and it was a MUCH more pleasant ride. We made the usual road trip stops: coffee breaks, gas stations, diaper changes. We marveled at the mountain vistas and lamented our numb bumbs. We also stopped at the Enchanted Forest because we thought Sadie might enjoy it, and she did...mostly. But.....have any of you ever been there?! It is seriously CREEPY. Allow me to post a photo: 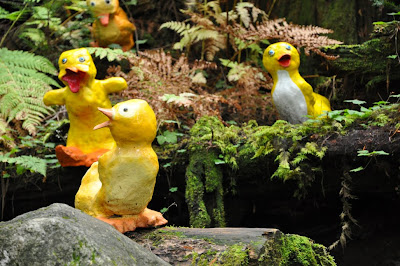 AAGGGHHHHH!!! I KNOW - I WAS NOT AWARE THERE WERE DUCKS AT THE CHERNOBYL DISASTER EITHER.
I will spare you the image of the "Chucky"-like papier mache baby head that is resting at the bottom of the pond outside The Old Woman Who Lived in a Shoe's Shoe. Intentional?? Or an unfortunate and macabre casualty of molded glued paper left to withstand the elements?
The Enchanted Forest is fairy tales and papier mache gone wrong. Gone horribly, horribly wrong.
But, I give credit to the effort that went - and is still going into - making a "magical" place in the forest for children. But I would highly recommend against the use of ANY form of hallucinogen while visiting. To be on the safe side, I'd stay away from even Gravol.
Wait - come to think of it, you might need that one...

The rest of these photos were taken out the window of our moving vehicle somewhere between Revelstoke and Banff, with the exception of the last two, which were taken at Lake Louise on our way home. 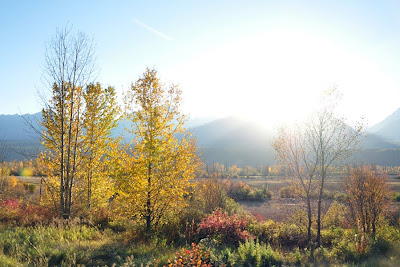 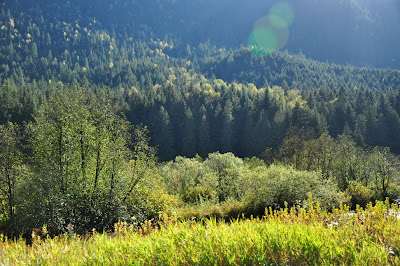 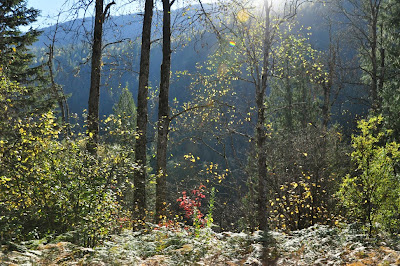 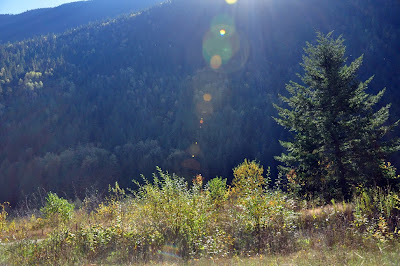 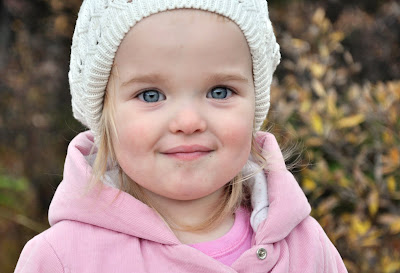 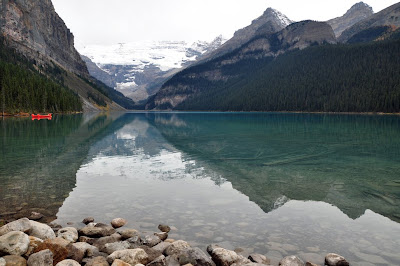 With Thanksgiving coming up this weekend (in Canada), I will be thankful for the sun-drenched colours of Autumn and for this wide open wilderness we had the privilege of passing through.
Posted by Koo and Poppet at 3:21 PM

Great photos! I've done the drive between Vancouver and the Rockies many times, but never during the Fall. It would be glorious, I'm sure.